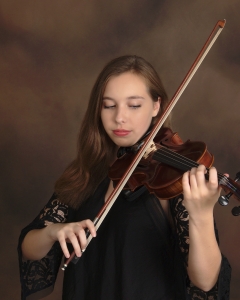 Julia Schilz (age 17), current student of Jaime Laredo and Jan Sloman, began her violin training at the age of four through The Sato Center for Suzuki Studies at The Cleveland Institute of Music. Past musical influences include William Preucil, Kimberly Meier-Sims and Stephen Sims. In May 2019, Julia performed Bruch’s Scottish Fantasy in Severance Hall as winner of The Cleveland Orchestra Youth Orchestra Concerto Competition. In June, Julia served as Concertmaster of The Cleveland Orchestra Youth Orchestra during their European tour, at distinguished venues such as the Musikverein and St. Florian’s Abbey, under the batons of Franz Welser-Möst and Vinay Parameswaran. The remainder of the summer was spent at the Heifetz International Music Institute. Most recently, Julia performed at Carnegie Hall as a participant in the New York String Orchestra Seminar.

Julia has also served as Concertmaster for The Cleveland Institute of Music Preparatory and Camerata String Orchestras, as well as for The Suzuki String Orchestra of the Americas in Minneapolis. As an intern with Kolkata Classics, a Secretary of State Award-Winning NGO, she toured India in the spring of 2018 to share classical music as a vehicle for social service and advocacy. Julia is the first-prize winner of the Lakeland Civic Orchestra Young Artists Competition junior and senior divisions. She also won first prize in the Sigma Alpha Iota String Competition, and was also featured as concerto soloist with The Cleveland Institute of Music Orchestra as winner of the CIM Preparatory Concerto Competition. She has performed in masterclasses for James Ehnes, Paul Kantor and Stephen Rose. Julia also studies piano and was a recipient of the Olga Radosavljevich Piano Scholarship Award. Julia treasures her volunteer work in the Music Therapy division of The Cleveland Music Settlement and enjoys sharing her love for music with the greater community.