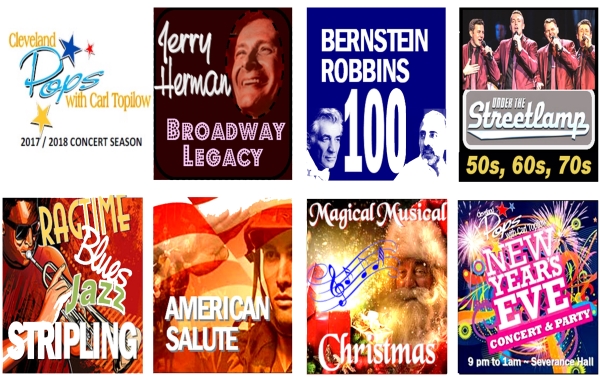 Cleveland Pops Announces Their 2017-2018 Concert Season under the direction of Maestro Carl Topilow!
JERRY HERMAN: The Broadway Legacy Concert
Saturday, October 21, 2017 – 8:00pm – Severance Hall
Jerry Herman is a legendary songsmith and a master of the show tune. From “Hello, Dolly” and “Mame” to “Mack and Mabel” and “La Cage aux Folles,” Jerry Herman has lit up Broadway for decades with toe-tapping, soul-stirring musical moments. Now, he’s sharing his legacy with a new generation. ASCAP and Spot-On Entertainment proudly present Jerry Herman: The Broadway Legacy Concert starring a cast of New York’s top Broadway and concert vocalists celebrating the songs and the stories of one of the giants of musical theater.
Hello, Jerry! Well, hello, Jerry! It’s so nice to have you back where you belong.
Starring: Tony Award-winner Debbie Gravitte / Tony Award-nominee Ron Raines / Klea Blackhurst /
Jason Graae

LEONARD BERNSTEIN and JEROME ROBBINS
A Centennial Celebration
Saturday, February 3, 2018 – 8:00pm – Severance Hall
Director/choreographer Jerome Robbins and composer Leonard Bernstein are two of Broadways most legendary figures. Together and separately, they helped bring the world “West Side Story,” “On the Town,” “The King and I,” “Peter Pan,” “Gypsy!” and more. And while they changed musical theatre forever, they were also great friends — both born one hundred years ago. The Cleveland Pops is proud to celebrate both their centennial and their remarkable friendship with a concert event guaranteed to leave you dancing on air.

UNDER THE STREETLAMP: Music of the 50s, 60s, and 70s
Friday, March 2, 2018 – 8:00pm – Severance Hall
The Cleveland Pops presents UNDER THE STREETLAMP: ROCKIN’ ROUND THE CLOCK, With their tight harmonies and smooth dance moves, the male quartet known as “Under the Streetlamp” performs an electrifying evening of classic hits from the American radio songbook.
Featuring former leading cast members of the Tony Award-winning Broadway musical “Jersey Boys”, Under the Streetlamp is a concert celebration of classic hits from the 1950s through the 1970s. You will hear Doo-Wop, Motown, and old time Rock ‘n’ Roll, including popular songs from The Drifters, Roy Orbison, Nat King Cole, The Beach Boys ,The Beatles and a show-stopping salute to Frankie Valli and the Four Seasons.
“Under the Streetlamp” delivers an evening of unforgettable entertainments that will take you back to an era of sharkskin suits, flashy cars and martini shakers. (concert descriptions continued on reverse side)

BYRON STRIPLING: RAGTIME, BLUES and ALL THAT JAZZ
Friday, April 6, 2018 – 8:00pm – Severance Hall
Cleveland Pops Orchestra is pleased to welcome back Byron Stripling for his third performance at Severance Hall. This time Byron brings us his electrifying and heartfelt tribute to Louis Armstrong which has become America’s most popular orchestral pops program. With his engaging rapport, jazzy vocals and virtuosic trumpet sounds, Byron dazzles audiences wherever he goes. With his signature version of “When the Saints Go Marchin’ In” to close the show, Byron celebrates the spirit of New Orleans and always leaves ’em dancing in the aisles!

AN AMERICAN SALUTE
Friday, May 25, 2018 – 8:00pm – Severance Hall
Don’t Miss the 17th celebration of the POPS’ annual patriotic classic. Be prepared for the best of military-inspired music and pageantry, magnificently expressed by Cleveland POPS Orchestra, Pops Chorus, Mutual Gifts Gospel Choir and featuring guests from all branches of the military and first responders who defend the home front.

Special Event Concerts
A MAGICAL HOLIDAY POPS
Sunday, November 26, 2017 – 2:00pm – Connor Palace Theatre
The holidays are a perfect time of year to create musical memories together! This year, The Cleveland Pops Orchestra with Carl Topilow will feature our talented musicians and vocalists, a telling of that magical story: “Twas the Night Before Christmas,” a joyous audience sing-along and many of the beloved Christmas songs and carols you’ve enjoyed all your life. Experience familiar holiday tunes like Sleigh Ride, Silent Night, the Nutcracker Suite and more, performed by the Cleveland Pops Orchestra, Pops Chorus, and dancers from the acclaimed Neos Dance Theatre.
There will be great family fun activities in the Connor Palace Lobby, including Adorable, adoptable pets from local rescue shelters, along with a visit from jolly old Santa Claus, and talented musicians from Beachwood Schools will add even more magic to this beloved annual Cleveland Pops
Sunday matinee Holiday Celebration. Call the Playhouse Square box office at 216-241-6000 for tickets

22nd ANNUAL NEW YEAR’S EVE CELEBRATION
Concert 9:00pm to 11:00pm, followed by partying until 1:00am – Severance Hall
For more than two decades Cleveland Pops Orchestra with Carl Topilow has put on the best and most entertaining New Year’s Eve party in Cleveland. Year after year, Cleveland Pops puts on a spectacular show at Severance Hall, lighting up the stage with first-rate entertainment. The two-hour concert is followed by a fantastic party to ring in the New Year with dancing and fun. Couples can dance to two live bands located in both the elegant Grand Foyer and the spacious Smith Lobby. For those who wish to extend their joyous evening, Cleveland Pops offers first-class accommodations at nearby InterContinental Hotel. Rounding out the evening, the Pops offers cash bars, coffee and desserts for purchase. One of the highlights of the evening is the
fabulous Giant Balloon Drop taking place at the stroke of midnight to welcome in the New Year.