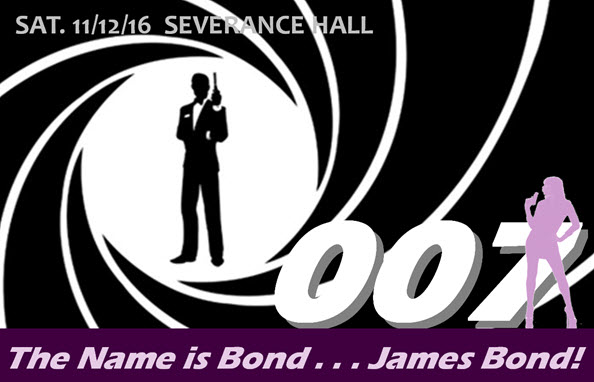 The Cleveland POPS Orchestra’s season-opening concert on Saturday, November 12th is devoted to the songs and themes that accompanied the exciting cinematic adventures of Ian Fleming’s unflappable Agent 007™. “The name is Bond…James Bond” is the title of the Cleveland Pops musical revue that will be performed at 8:00 p.m. in Severance Hall. Join us for the music from five decades of Bond films. Included are such iconic songwriters from Shirley Bassey to Paul McCartney and Carly Simon to Adele.

This concert is an exciting musical salute to the phenomenon that is James Bond—an international spy without peer—cool, calm, and collected, and never without a beautiful female accomplice on his arm. The accomplice in this case is the lovely and talented Rachel York. Together with the equally cool Carl Topilow and the even cooler Cleveland Pops Orchestra, this concert will start the ensemble’s 2016-2017 concert season with plenty of action and excitement.

What: Cleveland POPS presents “The Name is Bond…James Bond”

For additional concert information and to order tickets, see our “The name is Bond…James Bond” concert page.