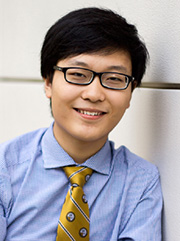 Jieming Tang’s performance in the Cleveland POPS Orchestra’s 15th Annual Salute to Our Armed Forces concert at Severance Hall in Cleveland, Ohio, on May 1, 2015, will be the fulfillment of his award as Grand Prize Winner of the 16th Annual Jean L. Petitt Memorial Music Scholarship Competition.

Tang, age 17, came to the United States from China in 2010. He is currently a student in the Young Artist Program at the Cleveland Institute of Music, where he studies violin with Jaime Laredo and chamber music with Joel Smirnoff. His former teacher at CIM was Paul Kantor, with whom he studied violin from 2010 to 2012. Tang has been a member of the Cleveland Orchestra Youth Orchestra since 2012, where he was recently appointed as concertmaster. He is also a junior at Saint Ignatius High School in Cleveland.