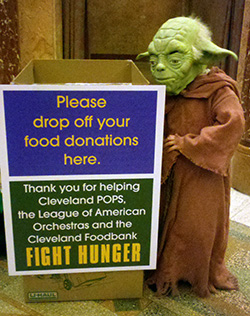 Over the past six years, more than 425 orchestras from across the country have collected and donated nearly 450,000 pounds of food through the Orchestras Feeding America National Food Drive. The project started in 2009. The food will be collected and distributed by The Cleveland Food Bank as part of their community-wide “Harvest for Hunger” campaign.

A Full Calendar of Music Events